Hotelier Jeff David has spent his career opening über-luxurious properties and rubbing shoulders with the likes of Barack Obama and Michael Jordan. Now at the helm of Fitler Club, he thinks his private club can turn Philly from a lagger (his word!) into a leader.

Get a compelling long read and must-have lifestyle tips in your inbox every Sunday morning — great with coffee! 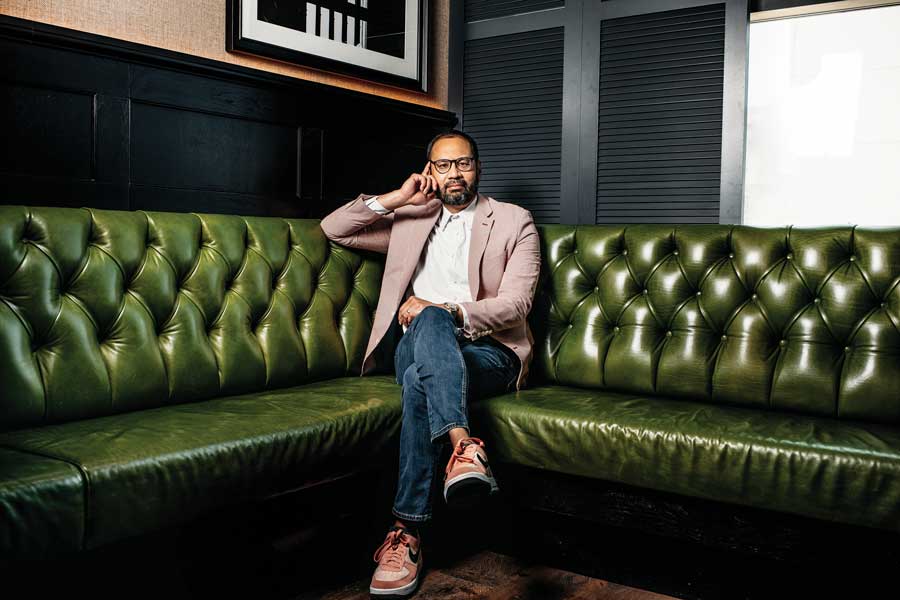 Jeff David of the Fitler Club. Photograph by Adam Jones

Jeff David has a definitive list of the most influential trend-setting cities in America, and Philadelphia isn’t on it. There are what he calls the “innovators” (New York), the “early majority” (Los Angeles, Miami, Chicago), and the “late majority” (Austin, Nashville, Boston, Portland). And then there are the laggers. “Philly,” David says, “is a lagger.”

David is telling me this in late spring, in the waning days of the pandemic, over a feast of roasted chicken, grilled asparagus and Neapolitan pizza that he’s ordered for us from the surprisingly busy and loud restaurant at the Fitler Club, the members-only establishment he’s been president of since February 2020. It might seem a slightly odd position to take, seeing as the Fitler Club is intended to be pretty much the opposite of lagging. Since opening in March 2019, it has catered to a young, hip and diverse crowd, leading it to be described — including by this magazine — ­as the anti-Union League, its more famous and much older private-club counterpart.

Part of the reason the city is a laggard, according to David, is that it’s a desert when it comes to popular brands. “There’s no Equinox or Soho House here,” he says, name-dropping two of the three businesses — ­the third is WeWork — to which the Fitler Club, with its exercise, social and co-working components, often compares itself. (Better not to dwell too much on WeWork’s implosion. David says its obscene valuation is what tanked it, not the co-working concept itself.)

“While every primary and secondary city is now getting Equinox,” David continues, “Philly is still embracing the Sporting Club,” the gym at the Bellevue that’s been around since the ’80s. He doesn’t have to look far to find another example: The W Hotels chain has been around long enough, he says, to have already “emerged, peaked and valleyed,” yet only now is Philly getting its first location.

Enter the Fitler Club. Housed in a glass rectangle built in 2018 that also contains Aramark’s corporate headquarters, the club is at the westernmost point of Center City, where it looks out on a vista across the river that mostly consists of cranes and other heavy equipment being used to construct the $3.5 billion project known as Schuylkill Yards. Compare that to the Union League, in its 1865 French Renaissance brownstone on Broad Street, just down from City Hall (1901) and the Rotunda Building (1908) that’s now a Ritz-Carlton. The symbolism is obvious. The Fitler Club — with its very much under-­construction environs — is meant to be a bastion of “new Philadelphians,” that much-heralded group we’ve been told for the past two decades is on the precipice of fundamentally changing the city.

David’s appraisal of the Philadelphia scene is pretty brave, considering the guy only showed up in town a year and a half ago and quite literally works out of a glass house. Not to mention all the fawning accolades the city has received in recent years: number three place to visit on the 2015 New York Times list of worldwide travel destinations; number one place to visit according to National Geographic; City of the Year in GQ; home to Esquire‘s Best New Restaurant in America. But David insists he doesn’t mean to throw stones; to him, these are simply empirical facts, no different from measuring the temperature outside.

He should know. Before coming on board as the Fitler Club’s president, David, who’s 48, spent more than a decade as a peripatetic hospitality guru, specializing in launching hotels — some of the glitziest hotels on earth. He opened the Viceroy (now a Four Seasons) on the Caribbean island of Anguilla, where the villas cost $20,000 a night, with a 10-night minimum. In 2015, he reopened the Knickerbocker in Times Square and later the Watergate in Washington, D.C., transforming its Nixonian-scandal rep into one of stylishness and glamour. Most recently, he oversaw the grand opening of the Santa Monica Proper, which in 2020 scored a spot on Travel + Leisure’s list of the best hotels in the world. All told, David has helped launch more than $1.7 billion in hotels across the Western Hemisphere. Now he’s in Philly, this lagging city, and has a vision of the Fitler Club, with its appeal to people who in other cities might frequent Soho House, WeWork and Equinox, shepherding us into a new era of post-­pandemic relevancy.

“You might have been underdogs, or rough Philly, violent Philly, homeless Philly, whatever stigma you guys are trying to outgrow,” he says. But now, he goes on, “Oh my God, the renaissance is totally happening. Fishtown is totally happening. Everything was like Center City, Old City, right?” He gestures out to the cranes across the river. “Now you’ve got everything on that side of the Schuylkill.” As if to re-emphasize the point, he continues: “It’s totally happening.”

Or at least, it was. Less than a month into David’s tenure, the pandemic hit. The club shut down completely. One of his first acts as president was to lay off 90 percent of its 270 employees. Whatever road Fitler Club was on — and David insists that with 1,200 memberships pre-pandemic, it was a good one, if not profitable just yet — turned smack into a dead end.

A year later, David thinks Fitler Club can still be everything it was supposed to be, and then some. “We want to be trailblazers; we want to rebuild Philadelphia,” he says. The world, however, has changed. Some of Fitler’s best selling points, like the fact that it provides both work and play under the same roof — or, as David puts it in slightly more ominous Silicon Valley-speak, “There’s no more work-life balance; there’s work-life integration” — may not quite be the draw they once were. If there’s one thing the pandemic taught us, it was that working from home was kind of nice, yes, but it was also exhausting to have our bedrooms converted into home offices we couldn’t ever leave. Perhaps there’s such a thing as too much work-life integration after all.

And while people are undeniably itching to see each other again — which ought to benefit a club that counts Howie Roseman, Josh Kopelman and Julie Ertz among its members and is keen on selling the social capital that comes with belonging — ­there is at the same time an open question of whether, after more than a year of being locked away from the outside world, the first place they’ll wish to reconvene is in a private club. Because in spite of that nice branding, the bowling alley, the smoothie stand, the indoor lap pool, and the multiple bars and restaurants, the truth is that a private club is just a different kind of quarantine.

One of David’s favorite books is Hit Makers, by Atlantic writer Derek Thompson, which poses a tantalizing question: What makes a hit a hit? Giving me a summary of the chapter about Adele’s septuple-platinum song “Hello,” David explains how the answer can be broken down almost scientifically. “There were predictors in the industry saying that’s gonna go platinum,” he says, including (according to his summary, anyway) “the octaves, the tone, the sound.” David absorbed a clear message from the anecdote: Record execs have a kind of ESP. They knew they had a giant hit on their hands.

David, who has always possessed a semi-obsessive streak (when he worked for the Knickerbocker, he overnighted in 318 of the hotel’s 330 rooms before opening), has only doubled down in his search for patterns he can analyze. Just today, he spent 40 minutes sitting in the Fitler Club’s garage, which has become increasingly busy of late, surveying traffic. “Life’s an algorithm, right?” he says, as if it’s hardly up for debate.

I ask David to apply the lessons from Hit Makers to the Fitler Club. What’s going to make this project a hit? He responds with one part philosophy, one…

Read More: Jeff David’s View From Inside the Fitler Club